Cuban born dancer and instructor Bibiana Peláez currently teaches Pink Ballet, Modern and Cuban Dance at the “Encore Academy of the Arts” to students of all levels.

Ms. Peláez teaching expertise spans more than a decade. At age 16 she began teaching at the “Lizt Alfonso Dance School” of Havana, Cuba, and later at schools and academies in Miami, Florida, such as the Conchita Espinosa Academy, Legends Studio, D’Scala Art Academy, and the “Encore Academy of te Arts.” She also worked as a choreographer of a children’s ballet in Hamburg, Germany, from 2012 through 2014.

In 2006, at age 16, Ms. Peláez started working as a professional dancer at her teacher Lizt Alfonso’s dance company. In 2010 she was appointed as one of the company’s soloist dancers, and later in 2012 she became the first dancer of the company.

Ms. Peláez has toured around the world performing at important venues such as the Guggenheim and the City Center in New York, and the Auditorium of Chicago (US); the Place d’Arts in Montreal, and the Royal Alexandra Theater in Toronto (Canada); the Schauspielhaus Hamburg, and Thalia Theatre, Hamburg (Germany); and others theaters and festivals in China, South Africa, Egypt, Mexico, Martinique, and Cuba. 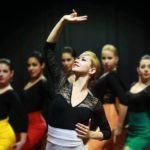